THE EVOLUTION OF A PROPERTY STALWART 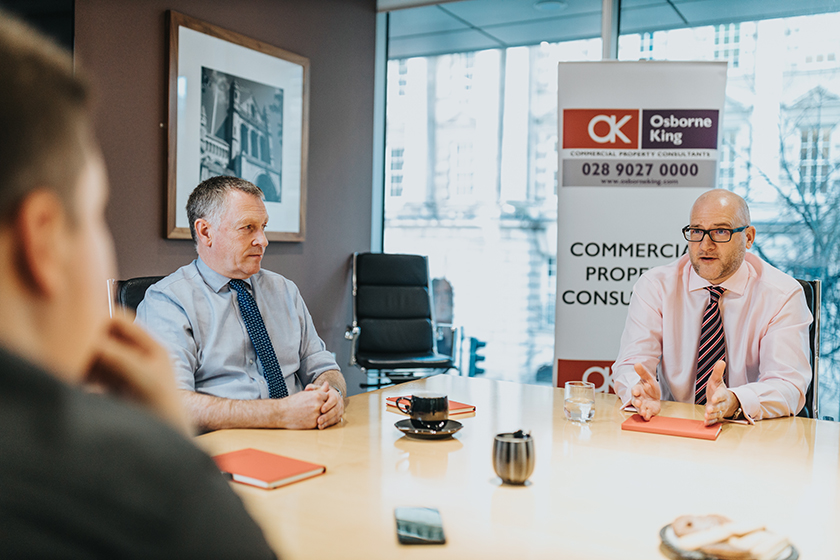 Following two decades in charge at Osborne King, Martin McDowell is stepping down to make way for the next generation at the helm. Ulster Business speaks to him and the new managing director David McClure about building on a lifelong career at the commercial property firm and its new evolution.

For Osborne King’s newly appointed managing director David McClure, it’s an independent organisation which he has spent his entire working life in.

He’s now at the helm of the Belfast-based commercial property consultancy, taking over the reins from Martin McDowell – who has spent almost 40 years with Osborne King.

“I turned 60 last November and I’ve been the managing director at Osborne King for 20 years. It is simply time to move things forward. David is the new evolution of the Osborne King leadership profile,” Martin says.

“We made the decision two years ago that we would get to this point, and Dave and I have been working together to get a seamless transfer.”

David has worked side-by-side with Martin for the last 20 years throughout various arms of the business. “From a continuity perspective, there is an evolution and there will be change, but in terms of the core values of the business, they will continue, and that’s something I’m keen to stress. The fundamentals will remain how they were in terms of how we approach things.”

Osborne King now has a team of more than 40, and sees its independence, local expertise and knowledge, along with a hugely experienced workforce, as its strength in setting it apart from others in the industry.

“We remain a local business. All decisions about this business, and the people in this business, are made here,” Martin says. “We are NI-based, NI centric and our expertise is here, but we can access other markets.”

And it’s about loyalty, according to David.  “For clients I believe the key thing is the accountability. They know the buck stops with us and they can lift the phone and get a response from the person that matters.

“Looking at where the market is going, we have kept our core team. Beyond the senior management team we have lots of staff who have been here for many years, and they are really experienced, most having 10-15 years.”

Martin says one of the things he’s most proud of is that Osborne King didn’t make a single member of staff redundant during the choppy waters of the recession.

“We kept people ahead of making profit because we always felt the core team coming out the far end we would be better placed to deal with the next phase,” he says.

“We do have the strongest advisory team in Northern Ireland,” David says. “That is because we have retained staff and experience – dealing through some very tough and challenging times. We are not into the short term idea. We want to stick with clients through the life of the asset.”

One of the significant developments in the firm’s recent history was the reintroduction of its property auctions – now one of the most successful areas of the business. And it’s evolved the traditional ‘ballroom’ auction to one based solely online.  Warmly referred to as an ‘Ozzie lifer’, David has been with Osborne King throughout his entire career, after graduating in 1998. He began working with agency before moving in to the company’s advisory arm, rising to the role of a director.

“At that time I worked as Martin’s assistant.  We had most of the major shopping centre instructions, acting for CastleCourt in Belfast, Bloomfield in Bangor and Fairhill in Ballymena.

We also had a lot of good retail clients.

“That gave me the grounding. I enjoyed it and as time wore on I developed more autonomy, building up relationships with clients. From that base, it all went well for around 10 years, before the wheels came off in the economy in general.”

And that saw David and the team working with clients under increasing financial pressures from their funders as they assessed how best to deal with the economic ramifications and impact of the global recession and collapse of the property market.

The last four years has seen a return to a more normalised market, with existing and new clients seeking opportunities throughout Northern Ireland.

David says he’s optimistic about the overall state of the marketplace. “A plus has been the Assembly getting back up and running, that there is greater certainty in terms of the UK’s exit from the EU and I think we are already starting to see people waking up to that – people saying, I can see the path ahead a little more clearly and on that basis I’m prepared to go.”

“When I look at our business, we have a fantastic platform – because of the experience.  We are now operating where the majority of our income comes from our property management and our advisory department.”

Martin says a boost in overall market activity would be welcome in the coming months and years. “In the last few years the deal activity has tailed off,” he says. “You need that constant evolution. We are still a very cost-effective place to be. Pound-for-pound, we are a much more cost-effective place for a business to set up in.”

“Certainty is what developers want. There’s a phrase ‘capital is a coward’ and it will not go where there is uncertainty.”

And the next step for Osborne King under David’s management will include utilising and embracing a raft of emerging technologies to help the company and its clients push through into a the new decade.