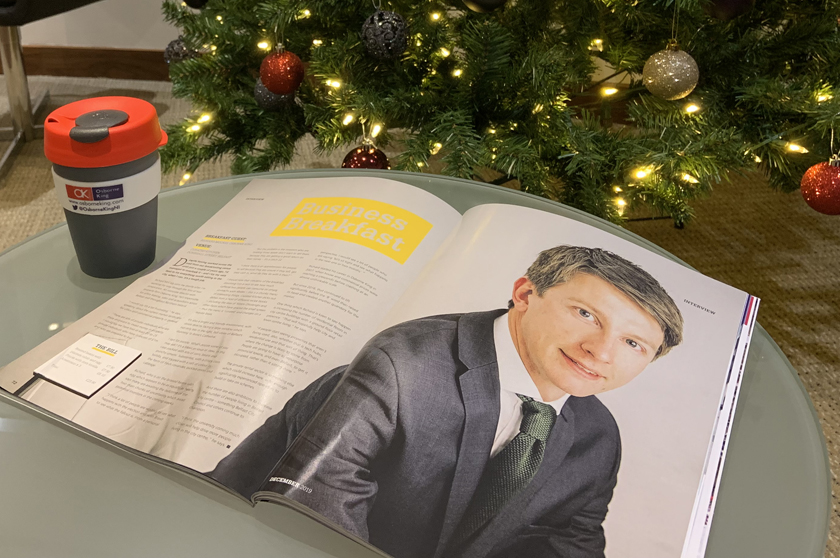 Despite having worked across the road from our breakfasting venue until just a couple of years ago, I’d managed to overlook it – and I try my very best to try everything worth eating in the city, when I can. It’s a tough job.

Richard McCaig joins me shortly after I’m working my way through the first of two Americanos. An associate director with property firm Osborne King, he’s responsible for office leasing, sales and acquisitions across Belfast and throughout Northern Ireland.

“But the problem is the investors who are holding those assets don’t want to sell them because they are getting a good return on their money – it’s a catch 22.

“I think there is an apprehension for people to sell because they are unsure if they sell, get their cash in, what do they do with it then?”

I should note that concerns of the breakfast dissolving into a race to see how much caffeine two people can consume on empty stomachs soon abates – this is a chunky menu of interesting things. Curated Kitchen picks out dishes from a host of different recipe books – including the likes of Yotam Ottolenghi and other faces which have graced the small screen – thus the menu is ‘curated’ and changes on a regular basis.

It’s also a bright and friendly environment, with stools directly facing a large window which not only lets in the light, but views of Belfast’s stunning St Anne’s Cathedral.

I opt for pozole.  What’s pozole some of you may ask?  It’s a Mexican soup or stew, in this case packed with lots of corn, beans and punchy umami. Substantial, with a crispy corn tortilla, and topped with a raft of colour in the form of fresh coriander, pickled onion and cabbage.

Richard, who is on the braised beans with egg which appears to be as equally as hearty, says many are awaiting the outcome of the two main chunks of uncertainty which await potential investors in the coming weeks.

Richard started his career in Osborne King in 2007, when house and commercial prices were reaching a crescendo before crashing at an almost unthinkable scale.

But since 2016, that continued to lift significantly, before the ‘B’ word then raised its head and created another quandary for the market.

One thing which Richard is keen to see happen is increasing the number of residential floors in city centre buildings with a ground floor retail presence. “That will hopefully help city and town centre living,” he says.

“If people start seeing properties that aren’t being used, also, whether that is tech hubs, residential use and that sort of thing. That’s where the change is likely to come from. People are going to have to repurpose provincial towns, and even Belfast, to get it occupied, rather than it sitting there.”

The private rental sector is something else which could increase here, with enough significantly experienced operators to build or take on schemes.

And there are also ambitions to increase the number of people living in Belfast city centre – something Belfast City Council and others continue to champion.

“I think the university coming much closer will help drive more people living in the city centre,” he says.