Osborne King was delighted to sponsor a new kit for Academy Rugby Club’s U-12 squad as the boys, coaches and supporters prepared to represent Ulster in the prestigious Rodez Top 12 Mini Rugby Tournament in the Aveyron region of south-west France scheduled to take place between the 3rd and 6th of October. 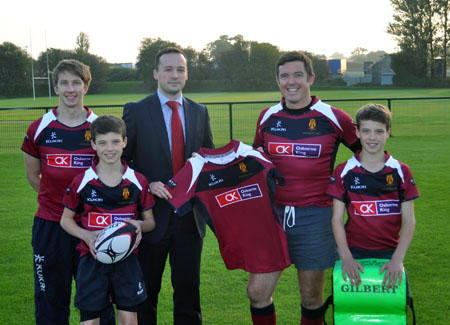 Gareth Howell, Retail Director with Osborne King who presented some of the team with their new kit commented: “We’re delighted to support the U-12 boys on this occasion and wish them every success in the Rodez Tournament. They are great ambassadors for Ulster junior rugby and a credit to their coaches, families and supporters.“

Academy is Ulster’s sole representative in the tournament at which 12 countries will be represented with teams coming from as far away as Argentina and South Africa. European Heineken stalwarts, Clermont Auvergne, Toulouse and Toulon will also be taking part presenting the boys from North Belfast and Newtownabbey with the opportunity to compete against the best that Europe has to offer.

Speaking on behalf of the club, Philip Ingram, Mini Rugby Convenor of Academy stated: “This is the ninth year running that Academy will have participated in this prestigious tournament and this says a lot for our performances and how the boys have conducted themselves at past tournaments. It is a fabulous way for our boys and coaches to complete their five-year mini rugby journey with Academy RFC. Most of the boys will now go on to play school rugby and we wish them well and hope they will come back to Academy to play their senior rugby after school.”

He added: “ We’d like to thank Osborne King as our main shirt sponsor, Brett Martin, Farset International Hotel and Conference Facility and Esportif Sport Management for supporting local community sport in this way. Without our sponsors, opportunities like these would not be available.”