Out of town retail market in general good health

The expansion of budget retailers helped to reduce Northern Irish retail warehousing vacancy levels to 9.5%, close to the UK average level of 9.2% according to "The Definitive Guide to Retail & Leisure Parks 2012", and this is lower than at any time since NI levels were first analysed in 2006. The Guide, compiled and published by independent retail consultants, Trevor Wood Associates, was launched for the first time in Northern Ireland at a recent breakfast briefing co–hosted by Osborne King Commercial Property Consultants and attended by local property professionals. 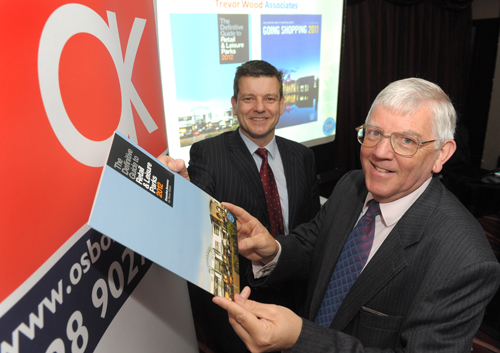 Trevor Wood Associates were established 25 years ago and have published the Guide since 2000. The Guide provides a detailed review of over 1,500 retail parks, shopping parks, leisure parks and retail warehousing developments across the UK including those proposed to open by 2018. Key findings reveal that Home Bargains, B & M and Poundworld acquired almost 1m sq ft out of town space between them during 2011 while B & Q increased its floor space by 5% on a UK wide basis. The Guide also reports that despite the demise or withdrawal of leading retail names from the UK market, vacant floor space remained at 9.2%. It attributes this to the fact that many of these vacant units have been snapped up by the rapidly expanding budget stores in addition to other retailers including Argos, Dunelm, Hobbycraft, New Look, Next, Matalan, Pets at Home and Smyths Toys.

As Trevor Wood, senior partner of Trevor Wood Associates explains, "The demand for space from the budget retailers and some more traditional high street stores means the out–of–town market remains in general good health. These retailers have taken advantage of the availability of large shops (often vacated by stores that have ceased trading) and which are easily accessible. More and more out–of–town retail parks resemble a traditional high street without some of the negative aspects."

A snapshot of the Northern Irish retail park and warehousing market reveals that these sectors are performing creditably in relation to other UK regions and, while rents are generally lower, vacancy levels within retail warehousing stand at their lowest level since records began in 2006.

Other key findings relating to the local market list the top three owners of retail warehousing within Northern Ireland as Corbo Properties, Killultagh Estates and the Murdoch Group.

The Guide also reveals that while Osborne King has entered the Top 20 Letting Agents in the UK for the first time, the Belfast–based company is ranked top letting and managing agents within Northern Ireland. Colin Mathewson, Retail Director with Osborne King commented, "We have been contributing to the Guide's database for many years now and have benefitted from being able to access and use the data provided in the Guide, which is extremely reliable and up–to–date. In my view, the marketplace in Northern Ireland is maturing to a point where this type of information is more relevant and useful than ever before, and we are delighted to be associated with Trevor and his colleagues in bringing the publication to a wider audience locally".

In addition to its Definitive Guide to Retail and Leisure Parks, Trevor Wood Associates publishes "Going Shopping: The Definitive Guide to Shopping Centres" an analysis of shopping centre and factory outlet developments across the UK, which covers over 900 schemes. The 2013 edition is scheduled for publication early next year.