Osborne King’s decision to hold its first large-scale property auction in over four years at the end of September 2011 was something of a gamble within the current economic and financial climate. Encouraged by the success of auctions south of the border and convinced that it was time to re-engage with the auction process, the company could also look to its enviable track record of achieving cumulative sales of over £188 million at auction during a three-year period. Indeed, Osborne King remains the sole Northern Irish property consultancy to have featured on a National Property Auction Index listing the Top 20 auctioneers within the UK. and the company has recently been credited as one of the 13 top-performing auction houses in the UK in a recent survey conducted by Estates Gazette magazine. 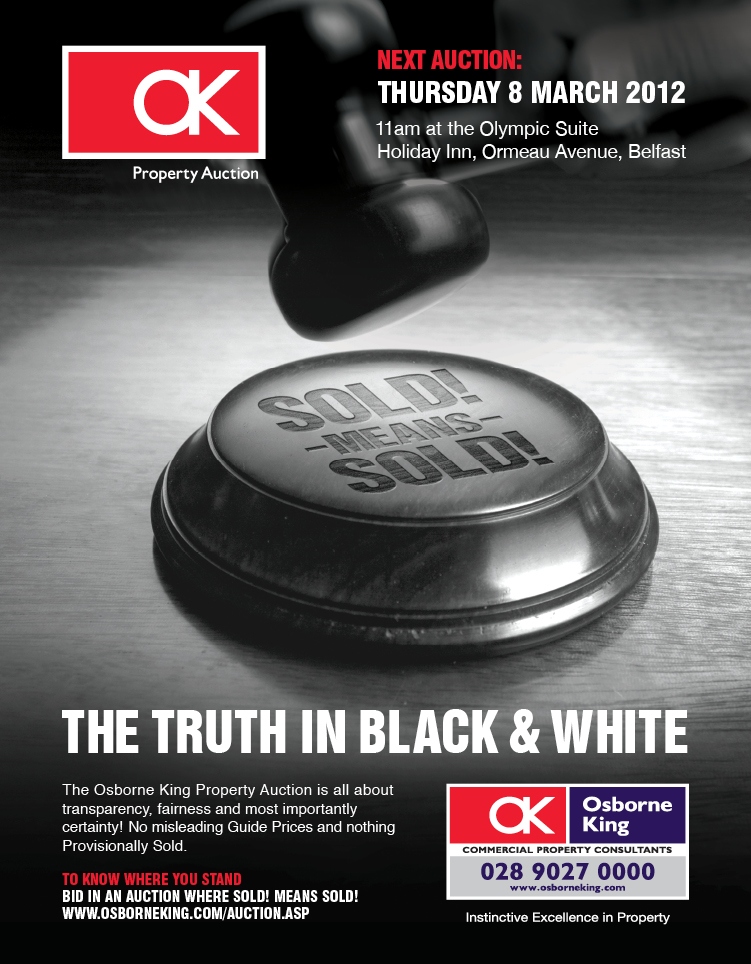 Faced now with dramatically different market conditions, the gamble paid off when a staggering 93% of the lots on offer went under the hammer as bidders from across Northern Ireland competed to secure commercial and residential properties ranging in value from £40,000 to £175,000 with actual sale prices of £40,000 up to £201,000. Lots on offer included a former police station, licensed premises, development land and a number of 3 and 4-bedroom houses. In contrast to previous auctions during the boom years, which were dominated by developers and private investors, bidders on the day included mainly buy-to-let investors and first-time buyers. Another contrasting feature of this auction was that all lots carried maximum reserve prices as opposed to guide prices, a deliberate policy according to Mark Carron, Head of Osborne King's Auction team, who explained: "In our opinion, the most appealing characteristics of an auction are transparency, openness and certainty. We're not in the business of attempting to sell lots provisionally on the day - when we say, "sold", we mean "sold", which is not always the case, particularly with regard to recent auctions elsewhere. This is why we will always state the maximum reserve price which means that people have confidence in being able to bid on and secure a property on the day."

The company's follow-up auction in December also attracted large numbers of interested buyers and the auction team sold 19 of the 23 lots on offer. This included office investment properties, residential development land, agricultural land and buildings in addition to a number of residential properties demonstrating once again that demand exists among buyers for realistically and competitively priced property.

This is all very well from a buyer's perspective: the auction process can work equally well for vendors as Mark Carron acknowledges, "We know for a fact that a large proportion of the lots sold at both auctions had been on the market for a considerable period of time, in some instances, up to two years without a successful sale. The fact that these properties sold at auction following a four week marketing period shows clearly that the auction process is an extremely effective and efficient method of sale, if it is managed professionally and responsibly."

Determined to maintain the momentum, Osborne King's first auction of 2012 is scheduled for Thursday 8th March at The Holiday Inn on Belfast's Ormeau Avenue. Expecting a strong turnout, Mark Carron concludes, "Obviously, it’s going to be difficult to replicate the success of our last two auctions. That said, we are confident that buyers will be encouraged to come out and bid on the day knowing that our properties are keenly and realistically priced. Property remains a good medium to long-term investment when one compares it to having money on deposit and other forms of investment."

The auction catalogue for the upcoming auction on the 8th of March will be available from the 10th of February either online at www.osborneking.com/auction.asp or by telephoning 028 9027 0000. The second Osborne King auction of 2012 will take place on Thursday 14th June.