Fairhill Shopping Centre marked the recent retirement of long-serving Centre Manager, Jim McGookin. Jim had been at the helm at Fairhill since its opening in 1991 and has managed the scheme through many changes and significant growth during his nineteen years in charge.

Built on the site of the former Ballymena Livestock Market, the shopping centre adopted the Fairhill name and opened in a blaze of publicity in 1991. The scheme originally extended to approximately 110,000 sq ft and brought Co-Op and Marks & Spencer to the town along with retail names such as Barratts, Mothercare, Dresswell, Goldsmiths, Early Learning Centre and Millets.

Subsequent investment has seen the Marks & Spencer store triple in size, the redevelopment of the former Co-Op store to create an extended mall with Bhs along with the development of the original car park entrance to provide units for Debenhams Desire, HMV, River Island, Oasis, Vera Moda and Petroleum. In addition, a multi -storey car park was constructed in 2000. More recently, Bhs have vacated the centre and this space is currently being redeveloped to create two major new shop units for Next and New Look, which are scheduled to open later this year.

Although originally developed by Co-Op and subsequently owned for a short period by TBF Charitable Trust, the scheme has been owned since 1998 by local property company, Corbo Ltd ,which has delivered all major development initiatives since then, creating the Fairhill Shopping Centre as we know it today that extends to approximately 350,000 sq ft.

Roger Craig of Corbo Ltd commented: “Jim’s commitment to Fairhill and his knowledge of the scheme is unquestionable and this has been of major importance bearing in mind the changes of ownership prior to its purchase by Corbo Ltd back in 1998. Jim’s management style has always been hands on and he was ever present in the mall talking to shoppers and shopkeepers alike, and beyond this he contributed widely to the general business community in the town.” 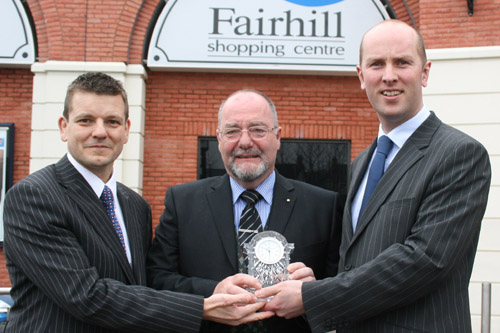 Colin Mathewson of Managing Agents, Osborne King, added: “Jim will be sorely missed at Fairhill and we would like to take this opportunity on behalf of everyone involved in Fairhill Shopping Centre over the last 19 years to wish him a very happy and healthy retirement.”