Home From Home For Charities

Two charities have become the final tenants in a new office block at Carryduff. The Northern Ireland Music Therapy Trust and the Child Brain Injury Trust, moved from other locations to the new offices at McKibbin House, Eastbank Road.

Letting Agents, Osborne King, said that all 22,000sq ft of office space at the property has now been taken. Another 12,000sq ft of space is being created by the construction of Eastbank House immediately beside McKibbin House. Around 8,000sq ft of that has already been agreed according to Chris Sweeney of Osborne King. He added: "Despite the economic downturn, we are receiving a steady stream of enquiries from interested parties, which proves that demand for quality, high specification office space still exists." The new building is expected to be completed in August this year and a third phase is planned. 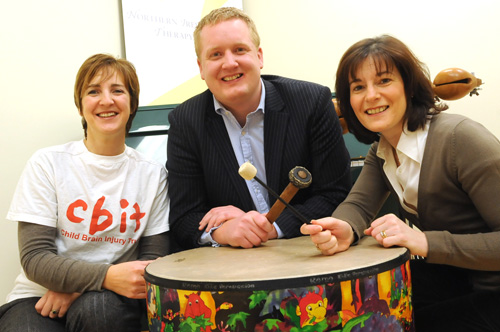 The Northern Ireland Music Therapy Trust provides a music therapy service for children, young people and adults with a range of difficulties and disabilities and is the main provider of clinical music therapy and employer of state-registered music therapists in the province. The organisation moved fromit's previous home in Knockbracken Healthcare Park.

Mr Sweeney said: "The new offices have been fully refurbished and tailored to meet specific needs including ample on-site parking, which was akey priority for both organisations."