The first clinic offering salt therapy to treat respiratory problems and allergies has opened at Throne Retail Centre on the Whitewell Road, Newtownabbey in a letting negotiated by Osborne King. Salt Clinic treats individuals suffering from a wide range of conditions including asthma, bronchitis, COPD (Chronic obstructive pulmonary disease), rhinitis, hay fever, psoriasis and eczema through simulating the microclimate of a natural salt cave. Patients undergoing salt therapy relax in one of the clinic's two treatment rooms (one for children with parents and the other for adults) whilst inhaling micro-particles of salt, which have a cleansing effect on the respiratory tract. The salt contains anti-inflammatory and anti-bacterial properties.

Originating in the salt mines of Eastern Europe and Russia when scientists discovered the healing properties of salt in such an environment, it was only in 1989 that new technology was developed that could successfully re-create the climate, temperature and humidity of a salt mine. Since then, salt therapy has been widely available throughout Eastern Europe and is now extending further afield with clinics opening in New York, London, Paris, Sydney, Toronto and Johannesburg during the past eighteen months. 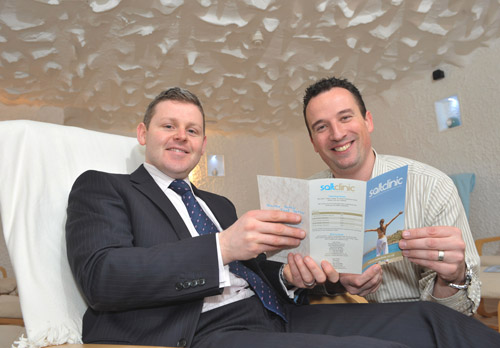 Owner of Salt Clinic, Roddy McQuaid, launched the concept in his native Omeath, Co. Louth last year, which is proving to be very successful, however, this is his first venture north of the border. As he explained: "At present, we have one Salt Clinic up and running in Omeath, which due to its proximity to the border makes it very accessible to people living on the main Belfast-Dublin corridor. By opening a clinic at Throne Retail Centre, we are extending our geographical reach considerably and hoping to attract people from the more northerly parts of the province. We have superb facilities here at the Throne Centre, which combined with easy access to major transport links and free, on-site parking are already drawing people from across Northern Ireland." Continuing, he said: "Having created seven new jobs in the process, we're now looking forward to consolidating and, hopefully, expanding our presence in Northern Ireland, particularly as the local population begins to experience the benefits of this type of treatment, which has proven to be extremely effective, safe and suitable for all age groups."

Mark Carron from Osborne King who negotiated the letting added: "It is great to see a new venture such as Salt Clinic establish a presence here at Throne Retail Centre and I am confident that the clinic will attract increasing numbers of visitors over the coming months. This is a unique facility offering a unique form of treatment for a diverse range of medical conditions and problems that affect a sizeable proportion of the local population, therefore, Roddy is to be congratulated on his innovativeness and vision in introducing this concept to Northern Ireland."

Salt Clinic is open seven days a week by appointment only and offers an initial treatment completely free of charge.

Meanwhile, further letting opportunities are available within Throne Retail Centre through Mark Carron who can be contacted on 028 9027 0000 or by emailing: mark.carron@osborneking.com