Congratulations to Carl Allen from Belfast who took a leap of faith and abseiled the Obel, the tallest building in Ireland, to raise vital funds for the Ulster Cancer Foundation (UCF) and Save the Children.

Developed by the Karl Group of Companies, the Obel stands at 289ft (88m) high and is one of the most impressive landmarks in Belfast. Carl enjoyed the unique opportunity to be part of an elite group of 150 participants, who were the first to abseil off the Obel, while helping to raise a total of £15,000 (and still counting!) for the two charities. 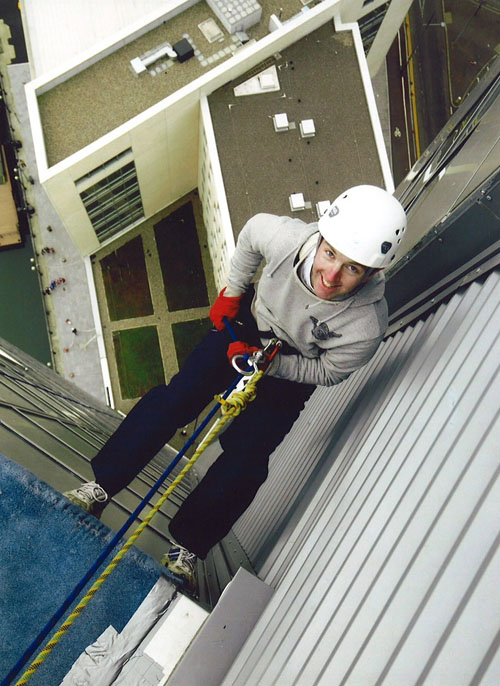 Sarah Atcheson from UCF said, "Congratulations to Carl and everyone who took part in the first Obel Abseil. Carl bravely took a leap of faith and successfully abseiled 289 feet, which is higher than 20 stacked double decker buses, to raise much needed funds for two very worthwhile charities. With 55,000 families in Northern Ireland living with cancer and around 10,700 people newly diagnosed each year, the money raised will make a huge contribution to UCF’s work in the local community. UCF is committed to tackling cancer by supporting cancer research, providing a wide range of services, free of charge, for cancer patients and their families and by educating people on how they can reduce their risk of the disease."

Jo Keating from Save the Children said, "The atmosphere at the Obel Abseil was electric and it was fantastic that every participant, young and old, completed the challenge. Special thanks to the team from Outdoor Concepts who facilitated the event. With your support Save the Children works in more than 120 countries saving children's lives, fighting for their rights and helping them fulfil their potential. Save the Children was established in 1919 and here in NI in 1952. Separate national organisations have been set up in more than 28 countries, sharing the aim of improving the lives of children through education, health care, and economic opportunities, as well as emergency aid in natural disasters, war, and other conflicts."