Northern Ireland's first dedicated fish foot spa, Appy Feet, opened for business recently at CastleCourt Shopping Centre in Belfast city centre. Unlike conventional pedicure treatments, the treatment offered by Appy Feet massages and removes dead skin from the feet using Garra Rufa fish also known as "Doctor Fish". Originating within the Far East, the concept of "fish spas" is now becoming more widely available in Europe and the United States albeit Christina Wright, founder of the Appy Feet brand, has been the first to introduce the concept to the UK. The CastleCourt store is the latest addition to a chain of Appy Feet stores in cities across the UK that includes Manchester, Nottingham, Edinburgh, Newcastle, York and Sheffield with another 15 stores proposed as part of a UK-wide expansion programme.

Explaining her decision to launch the Appy Feet brand in Northern Ireland, Christina Wright commented; "Having toured the Far East and experienced the fish foot spa in Okinawe, Japan, I decided I needed to get involved and made it my mission to bring the concept to the UK. My idea was to make the fish spa experience available, approachable and affordable to all. This is the first spa of its kind in Northern Ireland and we are very excited to be introducing Appy Feet to this beautiful city. The store's location is ideal for customers, making this new form of beauty treatment accessible to all the people of Belfast!" 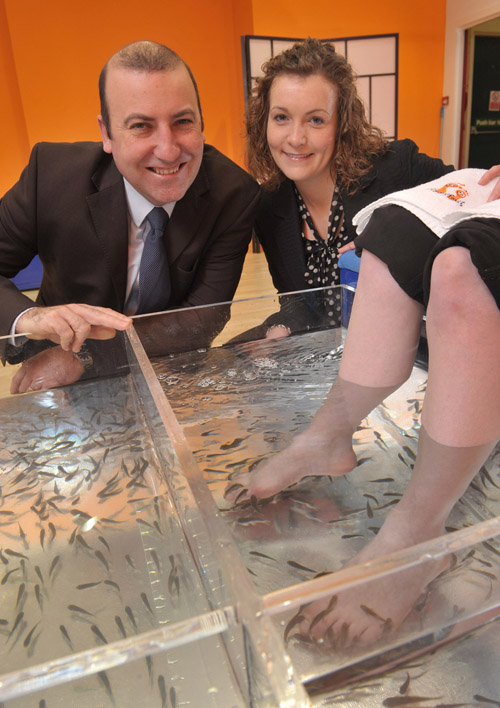 The Appy Feet store is the latest in a number of recent new lettings at CastleCourt that includes the arrival of Internacionale, the "fast fashion" women's retailer bringing catwalk trends at affordable prices to its customers and new arrival on the Irish retailing scene, Republic. As Alana Coyle from Osborne King who negotiated these lettings remarked; "It's great to welcome new names to the centre, particularly in view of the current difficult retailing environment. The fact that Appy Feet has chosen CastleCourt to launch its extremely innovative concept and service underpins the centre's strength as one of Northern Ireland's prime retail destinations."

Representing CastleCourt’s owners, Westfield Group, centre manager, Paul McMahon added; "Last year was definitely a demanding year for all of us and we have worked hard to ensure that vacancy levels at the centre have been kept to a minimum. We've had some exciting new additions to our tenant line-up during 2010 including Republic, Internacionale, and Virgin Media Store. It's also exciting for us to be able to attract unusual types of traders such as Appy Feet, which ensures that CastleCourt remains at the forefront of retailing excellence and innovation within the city centre."

The Appy Feet store at CastleCourt is open seven days a week during normal trading hours and no appointment is necessary.